Archive for the tag “chennai silks”

diamonds in the sky

last april i was in kerala and found myself wandering around the various sari departments of the chennai silks store. there are so many kinds of saris, so many colors, designs, fabrics, and qualities. “how do indian women buy their saris?” i wondered.

soon i was shadowing some customers, pretending to look at saris for myself, but in reality i was watching them to see if i could learn how they choose a sari.

on one of the floors, it seemed that sari purchases were a group endeavor. soon i was eavesdropping on a family buying a fabulous red sari. and when they moved over to try on the pink sari below, i finally started asking questions.

“is this a wedding party?” i asked.

“yes!” they said. davis, the groom, had his sister and mother and best friends in tow for the day.

seems that the fabulous red sari that they had picked out was for the bride. as part of the wedding protocol, she would change into the red sari when she came to her husband’s house.

and now they were buying a pink sari for davis’s sister.

next they let me tag along to see them purchase the groom’s wedding shirt.

in india, there’s no such thing as too much bling.

and then after the sari and wedding shirt purchases, they invited me to tag along to the jewelry store, where they bought gold chain and locket for the bride.

by now they had invited me to attend the wedding, so the next day i came back to the chennai silks store and bought a sari for myself. this sari cost about $18. wheee!!

and of course, i couldn’t wear my black flip flops with that fabulous sari, so i found some inexpensive diamond slippers for the occasion.

finally the day of the wedding arrived, and i took the mandatory soft-focus great-lighting auto-rickshaw selfie on my way to the wedding.

to kick things off, the groom’s family had a small pre-wedding blessing in front of the family’s catholic shine.

then we were off in a bus to the bride’s parents’ house. 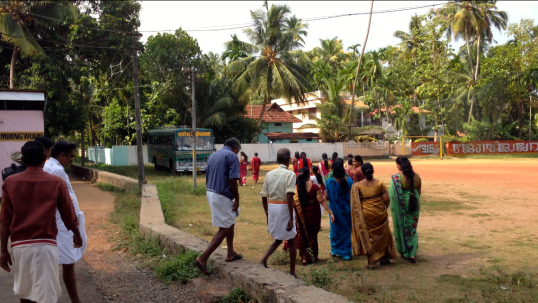 next came the hindu ceremony at the bride’s parents’ house. 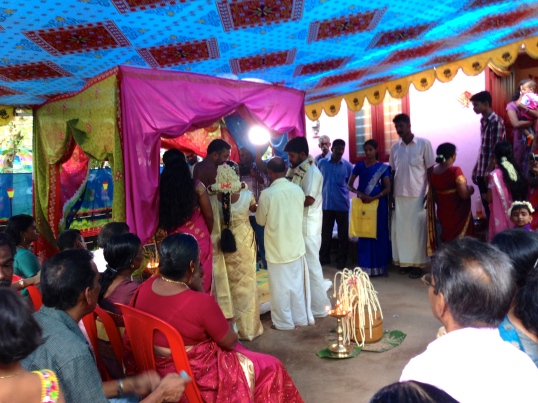 just married — davis and his bride! 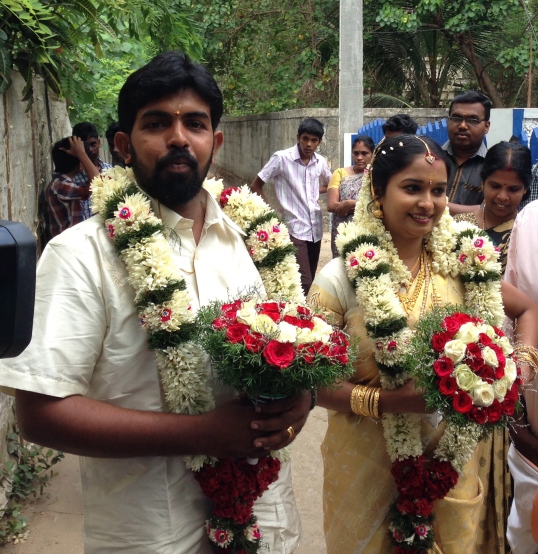 at the bride’s home, the food was served on a banana leaf and doled out from buckets.

this is one of davis’s friends who wanted to let me know how much trouble americans cause around the world.

back at davis’s house again, his sculptor friends are busy making ice swans for the groom’s family’s wedding reception in the afternoon and evening. 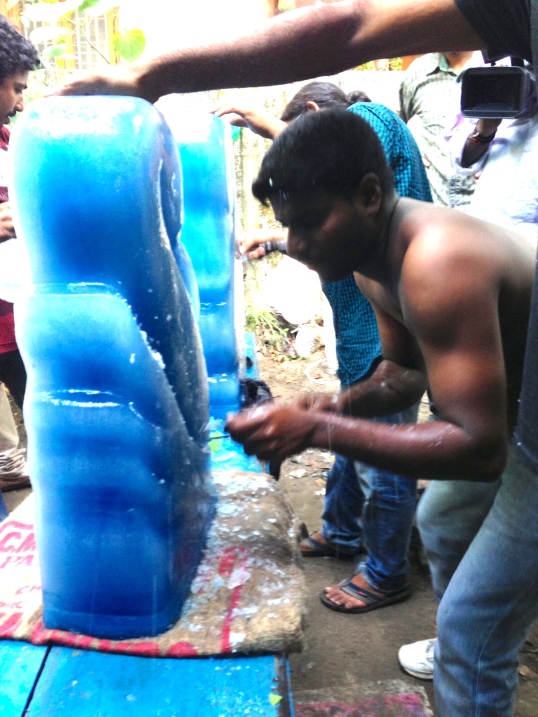 here’s one of davis’s friends, who gave me a ride on a motorcycle when there was a lull in the action. of course i rode side-saddle, and i felt like a real indian woman, riding along on the back of a motorcycle, all elegant and graceful.

but then something went wrong. 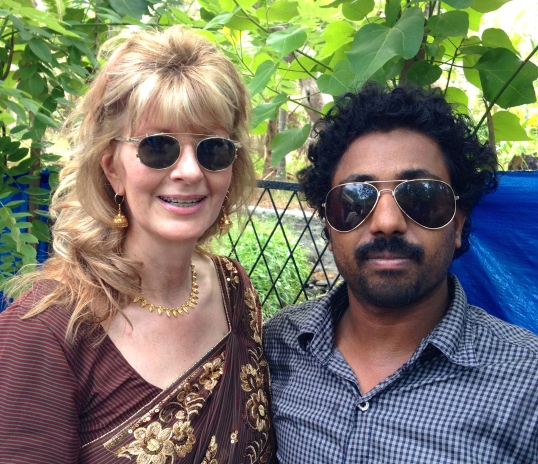 when we got back to davis’s house, he drove the bike down a short sandy hill and got too close to a pole, so he stopped and tried to turn the bike or something.

i’m not sure what happened really except that we came to a stop and then the bike started tipping to the right. but i was sitting side-saddle with my feet on the left.

once the bike started tipping, there was no stopping it, though he was holding onto it as best as he could.

thump! my back finally hit the dirt, my sari went askew, and then all i could see were my feet in the air. diamond slippers in the blue sky.

two onlookers rushed over to pick me up and dust me off, and we all laughed so hard about the ridiculous slow motion fall. so much for being elegant and graceful.

hours and hours later came the cake ceremony, with davis’s mom and dad looking on. 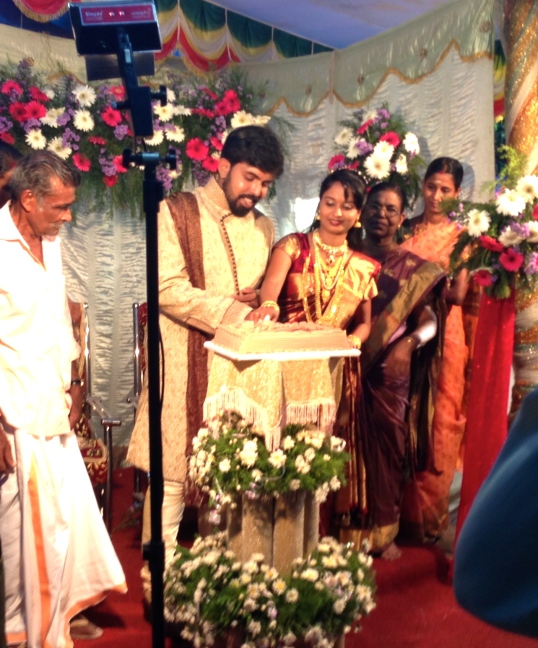 the second meal of the wedding, this one at the groom’s house. super yummy.

all too soon it was time for me to go, but there’s always time for one more photo with davis’s sister.

this family was on the train to kerala. the little girl was a super-fast learner and liked it so much, grandma and grandpa and little brother barely got a chance to try it.

this guy might have something here! (very short video)

aunty on the train back to pune. 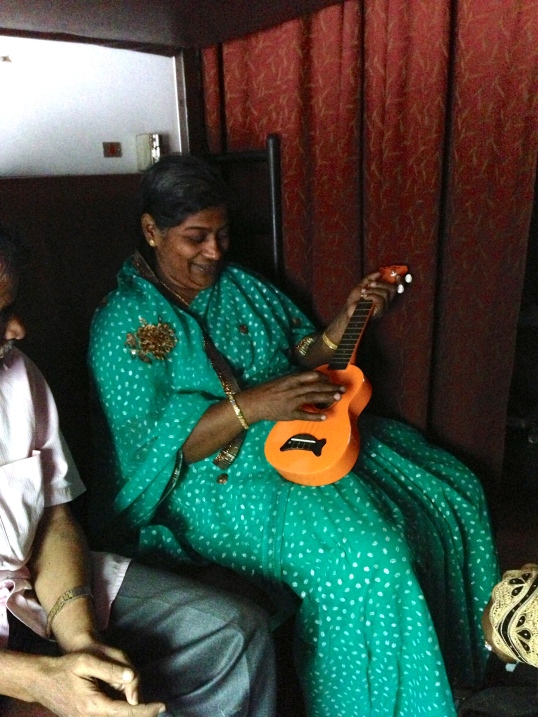 one more little girl on the train, sitar style. 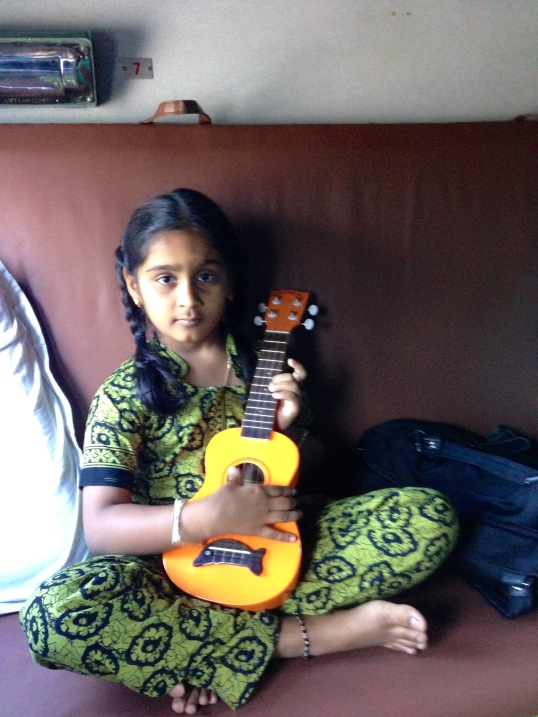